We have arrived at Dripping Springs!!! The Pantherbots have checked the robot in, passing inspection.  The team gets ready for a long, eventful, exciting two day competition. Don’t forget to tune in on Twitch this weekend to support the team!

This weekend we are traveling to Dripping Springs High School to compete in our first FRC FIRST Robotics competition of the season!!!! Click the link to watch us go head-to-head on the gamefield:  https:// www.twitch.tv/firstintexasevents.

Below are our shooting display from Saturday: 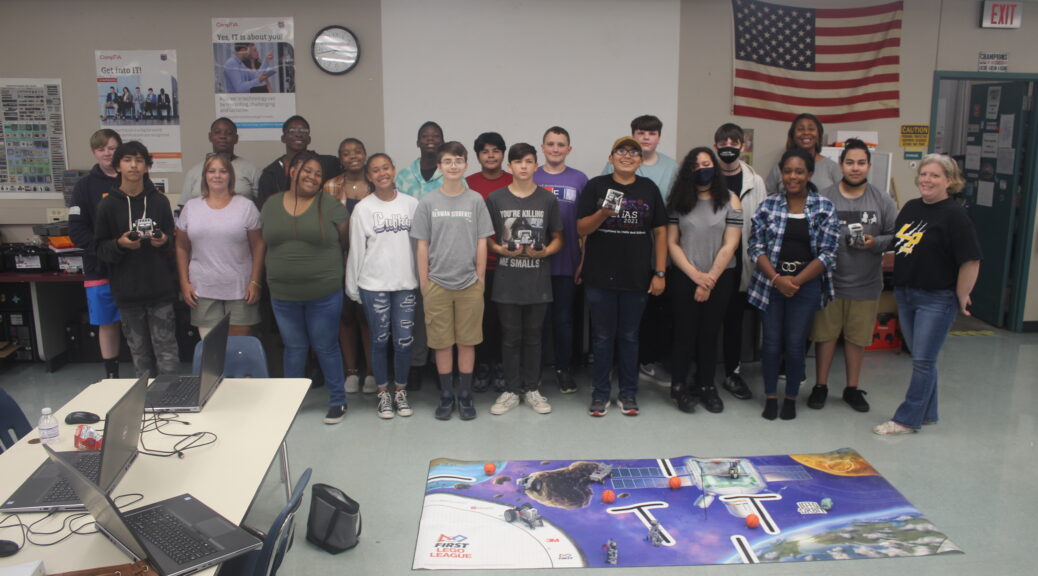 This week the PantherBots partnered with GearUP to host teams of freshmen students for a week of building, programming, and testing their EV3 Lego Mars rover. With many challenges such as budget cuts, lawsuits, and even a last second problem of cosmic radiation that caused a change in code, it was a challenging and exciting experience.  The pictures of the fun are below:

On Monday all of the campers organized their Lego kits, decided on a team name, and made their logos, which we are now 3D printing. Pictured below are the teams:

On Tuesday the teams started to build their absolutely magnificent robots and develop code. Teams started working on the presentations and completing their 3D logos. Teams are off to a great start with some able to run half of the course by Tuesday. During our break we demonstrated our newest drive train affectionately called Swervey bot as well as our award winning robot that played in the FRC game Steamworks.

On Wednesday the teams started to run the course with ease. Most teams completed their code while others finished up the PowerPoints. Teams were advised NASA would have a press conference on Thursday morning at 10:45 a.m. CST.

Thursday, AKA announcement day. The teams were told that due to cosmic radiations their forward boosters had failed. This meant that if they traveled to Earth they would have to reverse into Mars. Their reaction was very eager to take on the challenge. They also had our first Corporate Espionage lawsuit between Stars United and the Banana Ducks. The suit was dismissed due to lack of evidence.

On Friday all the campers came in ready to work, demonstrate their robots and give their presentations with their minds set on earning the most points and being awarded the Golden Ratio Double Seahorse Gear Trophy. The teams are ready to demonstrate their code and presentations to friends, family, and judges. Our judges for this event are Jeffin James and Matt Millican two of our local Lockheed Martin Manufacturing Engineers.