Well guys its the end of week 3. Just to give you an update of what is going on with the team, this is just a run down of what every sub-team is doing on robotics.

As of last night the team has made significant headway. For the first time in our team history we are moving forward with a custom chassis instead of the one provided in the kit of parts. We believe this is a significant step in helping to tip us over the line of being a high-quality mid-level team to a high-level team. Last year a comment was made by a World Championship team that we compete with on a regular basis (Torque out of the Woodlands), ‘You guys came to play this year!’ For me that comment (by a mentor/coach) indicates that we are earning the respect of what I call the Powerhouse teams and this year we intend to let them know we are not going away!

The past week has seen the team hard at work (even when they look like they are playing):

PR – These kiddos have been working to document the progress of the team through photos, videos, essays, interviews, and award entries. Many are still learning the ropes when it comes to video and picture editing software. They are learning how to responsibly and professionally use social media to put out information about the team. Along with all of that they are having to use their English skills to write professional formal essays for award submission. In essence they are the historians of the team and they are doing a fantastic job.

Mechanical – It is because of the mechanical team that we have the robot that you see designed in the attached photos. They spent a lot of time prototyping and making sure that we could actually launch the ‘boulder’ into the high goal. They have also built a practice drive chassis for the programming team to get a head start on making sure their code will work. This is extremely helpful in terms of working out the bugs in our new control system.

Electrical – The electrical team has managed to wire the experimental drive chassis and a test board for the programmers without electrocuting anyone J. These systems will be utilized to test vision tracking software and drive code. They also tracked down enough motor controllers to save us almost 300.00 in purchasing new ones and that is a HUGE help! They work as hard as anyone on the team and keep us all ‘grounded’ 😉

Programming – The programming team has had a little bit of a rough road this week. This year FIRST implemented a new router and software configuration to communicate with the robot brain (the robot brain is called the RoboRio or just Rio). This has led to some unexpected bumps in the road for them. None of them have ever worked with this particular device before and despite much frustration they have been putting their heads together to try and get it all figured out. These kiddos are taxing their brains and research skills every afternoon to try and get all the communications working and for their dedication they get a BIG pat on the back.

CAD/Creo – This is a relatively new sub-team for us. One we have always wanted but not been able to truly take advantage of. For those of you who are not familiar with this CAD stands for Computer Aided Drafting. It is the software that allows us to create 3-dimensional images of our robot on the computer. The software we are using is called Creo. With the help of our mentors and one student who has quality experience with Creo several of the mechanical and electrical team members are refocusing their efforts into learning how to use Creo and help Mr. Robertson (our lead mentor) create the individual parts that will be used to build our robot. If you have ever seen the drafting plans for a house with all the dimensions, specifications, and every detail drawn…this is like that just for mechanical devices. Without these drawings (also called ‘spec sheets’) we couldn’t send parts out to have them manufactured to build our robots.

Well guys the season has just started. If you keep up with our Facebook you know that we made a really good run last year. We were very proud of are students they did their very best last year we could not have asked for a better team. This year we have the biggest team ever and we are so excited to see what this build season is going to bring us. We are three week in and we are very hard at work. We have been trying to get people try and do vision tracking and target tracking,for the first time on this team in Lufkin PantherBot history. This will help us a lot with this years challenge, this years is one of the hardest challenge. #frc2582

The robotics team members are intuitively working in order to meet the OSHA deadline which is February 24th! Bag and tag is Tuesday, February, 17th. The entire team is focused and super excited for competition. We will keep updating as often as possible!

The OSHA completion deadline is creeping up on the team members. February 15th is the official cut off date! Although the robot is not yet fully completed, it is functional. Stay vigilant on upcoming post that are soon to come.

Congratulations to Krystal, one of our programmers, for getting accepted into her school of choice, Lamar University. Krystal is going to major in computer science. We wish her the best of luck for her near future!

Our Roboteers have been studying diligently on the OSHA (Occupational Safety and Heath Administration) online program in order to be allowed in the pit area and be on the drive team during the Robotics FIRST competition in April. The program is a 10 hour instructional course culminating with an industry certification exam that they’re required to pass. Good luck to all our OSHA students! Also T-shirts are on the way, and are being finalized. You can support the team by purchasing one for $20. If you are interested in buying a shirt please message Panther Bots on Facebook. https://www.facebook.com/LHSPantherBots?fref=nf 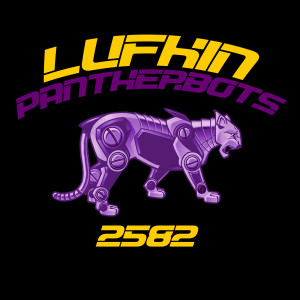 We are on schedule! Parts are being CADed, prototypes are being made, team members are busy, and we have three weeks to go! Fairly soon we will be posting pictures of our progress. Keep an eye on our social media!